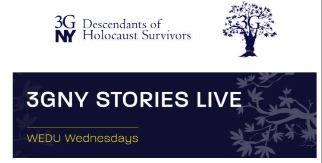 Join 3GNY in conversation with Tamir Goodman, former Pro-Basketball player and current successful entrepreneur, coach and educator who credits his survivor grandmother for helping him to overcome life's obstacles.

Virtual Film Screening: When Hitler Stone Pink Rabbit
Support 3GNY while you watch!
Cost: $9.99 to view the film, with 30% of proceeds benefitting 3GNY.
View the film anytime from May 5 - May 21, 2021

From Academy Award® winning director Caroline Link (Nowhere in Africa) comes an adaptation of acclaimed British author Judith Kerr’s classic novel based on her childhood memories. The story of a Jewish family's escape from 1933 Berlin to Europe tackles prejudice, exile, displacement and adaptation, as told from the perspective of the author’s alter ego, nine year-old Anna Kemper (Riva Krymalowski in her feature film debut).Anna is too busy with schoolwork and friends to notice Hitler’s face glaring from posters plastered all over 1933 Berlin. But when her father (Oliver Masucci) - based on the prominent theater critic Alfred Kerr - suddenly vanishes, the family is secretly hurried out of Germany. Anna begins to understand life will never be the same as she and her family navigate unfamiliar lands and cope with the challenges of being refugees.

3GNY to be Featured at the Washington Jewish Film and Music Festival 3GNY has partnered with the JxJ festival to promote the film "You Had to be There." This is a fascinating and life-affirming investigation of the critical role of humor as a coping mechanism during the Holocaust. Israeli comedian Tal Friedman interviews survivors (even having a beer with two of them in a bar!), who shed light on the profundity and importance of keeping laughter alive, even in the bleakest and most horrific of circumstances.

You can watch the film anytime between May 23rd and May 30th.

Ellen will lead discussions in which you can learn from one another and gain a deeper understanding of your legacy, your Survivor grandparents, your 2G parents, and yourselves.

Ellen Bachner Greenberg is co-founder and president of Descendants of Holocaust Survivors/2G Greater New York.  The group offers programs on topics of interest to descendants, many in partnership with the Museum of Jewish Heritage - A Living Memorial to the Holocaust. A Certified Life Coach, Ellen runs 2G and 3G Discussion Groups and workshops on writing family stories. Ellen is the child of two Holocaust Survivors and the parent of two 3G descendants.

An opportunity to explore the experiences, meanings, impacts, and responsibilities of being a Descendant of the Holocaust with other 3Gs.